I'm back - and I brought shuttles! 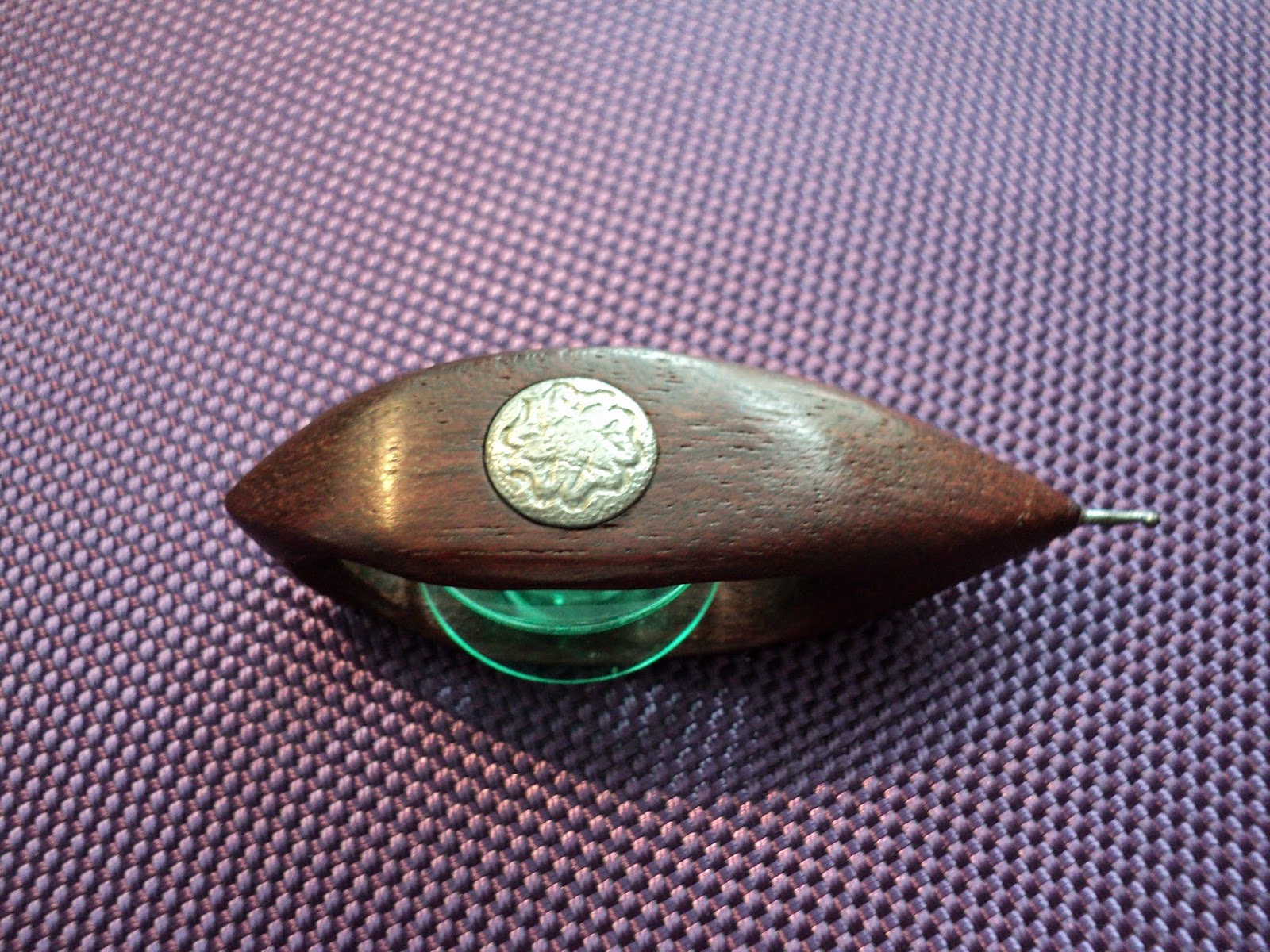 First, there was one ... I had to save up for it, but it gave me time to decide on the kind of wood I wanted.  Randy Houtz directed me to a website with pictures of the woods he could use to create my shuttle, and I really liked the bloodwood.  As it's aged, it resembles mahogany - so I get asked (a lot!) if it really is mahogany, and where I got it.  I 'fess up that it's not really mahogany, but bloodwood - and mention that The Shuttle Brothers are online and still taking orders. 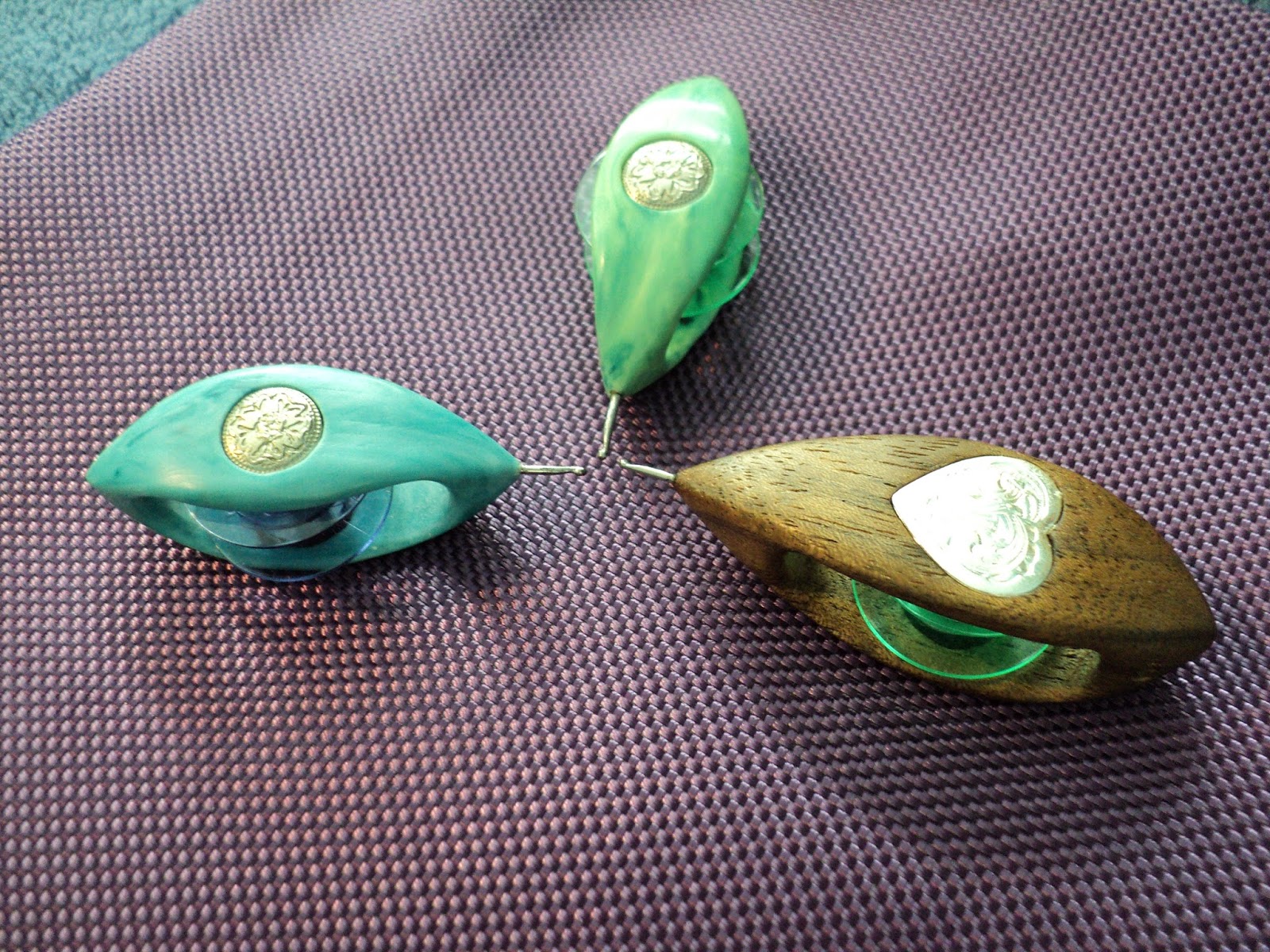 Have you noticed?  Shuttles are worse than salted peanuts or potato chips - we always want more.  So ... several years after enjoying my Gr8 bloodwood shuttle, Shuttle Brother Randy came to Palmetto Tat Days and brought dozens of shuttles! I fell in love with the black walnut shuttle and decided I really should also try one of their acrylic shuttles.  Decision, decisions, should I purchase the blue one or the green ... but my dear hubby told me I should get both, so I did! 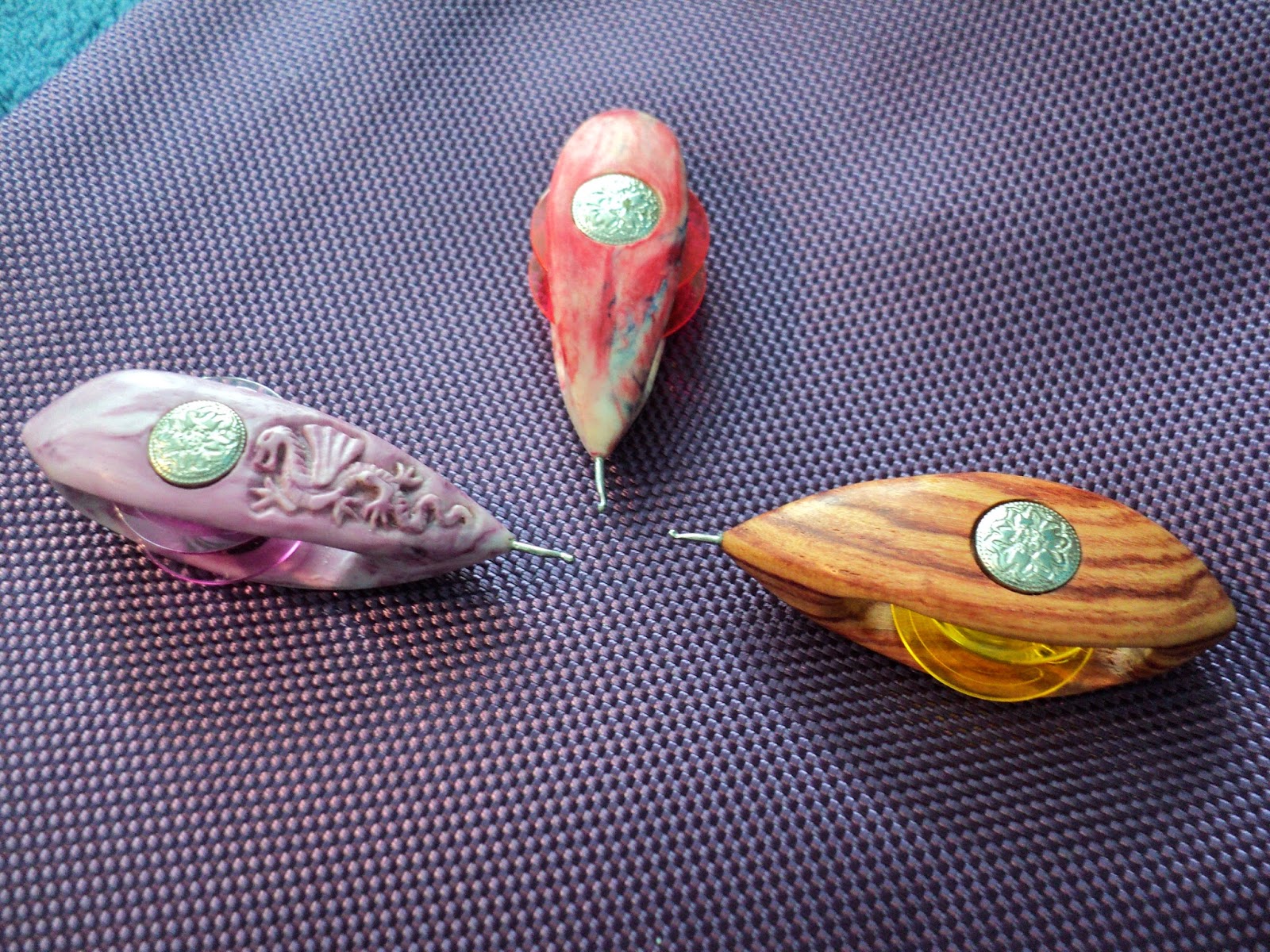 Last year, Shuttle Brother Randy came to Palmetto Tat Days again - and brought more shuttles!  I had saved up in hopes of finding another Gr8 shuttle I really liked, and actually found three!  The wooden one is tulipwood - I think it's one of the most beautifully grained woods I've ever seen.  I saw the red tie-dye acrylic and picked it up, and then saw the purple carved dragon.  Love the dragon!
Gr8 shuttles come equipped with a green bobbin - but the bobbins come in other colors as well, and I found a source right here in Greenwood (SC) and bought some.  I have a red one in the red tie-dye shuttle, a pinky-lavender one in the purple dragon, and a yellow one in the tulipwood shuttle.  I have more bobbins in a bobbin box I got on sale several years ago, along with some metal bobbins for some different bobbin shuttles I have.  I also have more of the Aero-type bobbins, but not all bobbins fit well in the bobbin box (maybe that's why it was on sale!).
I'm now saving up for Palmetto Tat Days.  I've applied to teach, but I haven't heard from them as yet.  Hopefully soon - - then I'll know how much of what I've saved up can be used for more shuttles!
Posted by Sharren - Tatting in Greenwood, South Carolina at 11:47 AM 3 comments:

We went to Columbia, South Carolina, to the State Fair, yesterday - it was time well-spent, as we spent it in the Palmetto Tatters booth!  We talked with passersby about tatting and offered (their choice) a small tatted memento of their visit.
Answers to random questions by passersby:
We also demonstrated how we tat, and most of us made up little items we put on the table for passersby.  I made several turtles and a butterfly: 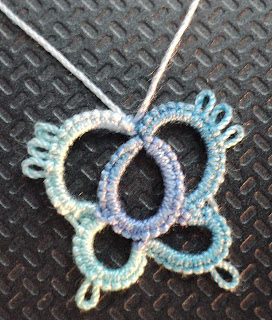 They make up fairly quickly, and they're a nice change of pace from the classic 4-ring butterfly we've all made tons of!
Posted by Sharren - Tatting in Greenwood, South Carolina at 10:27 AM 2 comments:

It's been a very busy summer - everyone goes on vacation, and we cover job duties for one another - and some folks get sick!  Not me - but a good friend who is a vital member of our work team did get sick, so it was back to overtime work for me!

I taught at Palmetto Tat Days in early September, and had a blast - it's always so much fun to be with friends who have much the same interests!  Some are also avid knitters, and that started a train of thought that led to knitting and my ever-growing yarn stash.

I started looking through all my needlework stuff and discovered I couldn't find half the knitting needles I wanted - duhhh - they're all in works in progress!  It's nice to know that I can find them at Michael's and at HobLob (some sizes/kinds also available at Wally World), but as this was last Sunday, and I wasn't thinking about Wally World, we went to Mikey's.  I had looked over some free patterns online and found a shrug; I got the needles (a set of double-points and a 29" circular), and ... yes, I looked at yarns!

I have learned so much in the past week - 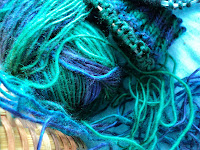 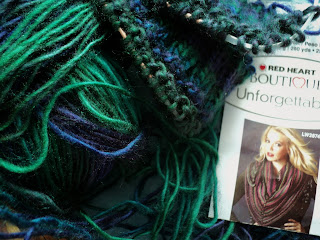 Honestly, what should be so difficult about knitting Feather & Fan pattern?  Three rows of stocking stitch and one pattern row - what's so hard?  Well, let me tell you - because roving will split and you can (I did) inadvertently make an increase where you didn't intend.  It's also an absolute bear to un-knit - or even to remove the needle and try to rip with abandon; roving likes to stick to itself.  I got out my sharp little scissors and carefully snipped the strands trying to make friends with the stitch next door, and managed to get all the way back to my K2P2 ribbing.  At that point, I gave up on Feather & Fan and decided to try Trinity Stitch, which I memorized back in 10th grade (roughly 300 years ago, give or take a decade).

It's hard to knit Unforgettable - - it's even harder to re-knit Unforgettable.  Let us draw the curtain on this tragic little scene; suffice to say that the ribbing and the lumpy bits that used to be the Unforgettable that I ripped back several times are in the basket and may stay there.  In the meantime, I found several online comments that this particular type of yarn is better suited to crochet, and I found a beautiful shawl pattern free online, so that's the plan for the upcoming week.  I have plain ol' worsted that I'll use to make the shrug.  I may even go back to Feather & Fan!


Posted by Sharren - Tatting in Greenwood, South Carolina at 11:46 AM 7 comments: 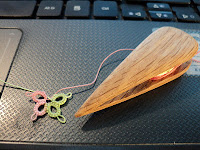 Just bought it in the last few days - it's solid oak and feels nice in your hand.  Holds a bunch of thread, too!  The seller is Monica Braxton (the link will take you to her Etsy shop).

It took me a few minutes to get used to tatting with it, as it's a different shape from what I've been used to using, but I got the knack and quickly tatted a little butterfly (below). 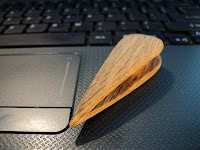 It's affordable; and she has another style shuttle as well as some lovely hand-dyed threads. 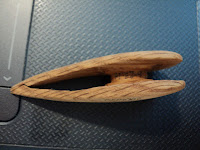 I may have to get back into knitting - my DGD asked today if I'd teach her to knit!  She's eight years old now, and I had already bought and put away for her a pair of child-sized knitting needles.  I got them out, let her pick out the yarn she wanted to use, and away we went!  She's decided that she wants to knit a scarf and a bag.  Ambitious, right?!  She seems to understand the construction of the stitch and told me, "It'll just take practice, Granny."  She constantly amazes me!

Vacation is over...for awhile.  We've just spent a lovely week of leisure pursuits, including a couple of nights at the Simmons-Bond Inn, in Toccoa, Georgia (US).  It's our favorite getaway spot - we wish we could go more often, but time is usually the deciding factor!  Toccoa also has a great museum - one of the best I've ever seen - on the military.  It covers the Revolutionary War through Afghanistan, with a fantastic (and huge) section on Easy Company (Band of Brothers), including one of the actual stables they called home while stationed in England!

﻿ We didn't get to visit with Karrieann this time, but on the way back to Greenwood we stopped by Panera Bread in Anderson and had lunch with Marie Smith and her hubby, Rick.  It was David's first time in a Panera Bread - now it's his new favorite!  Wish we had one in Greenwood!

﻿﻿I've not tatted a whole lot lately - I did one 4-point star for the Starbursts class, in order to make some notes on how much thread is needed for the 4-point and each successive Starburst - determined that and passed it on to the Palmetto Tatters for test-tatting.

﻿ Toccoa is a nice town - great place to visit, and we always hate to leave.  The Simmons-Bond Inn is right there in town, so it's a very easy walk to restaurants and antique shops.  They have a really nice used bookstore, where we found a few books we'd been hoping to find somewhere, and I noticed this sign on the way out.  (In case it's too small to read easily, it says "The Toccoa Literary and Chicken Pot Pie Society: A Writer's Group of Book Lovers - New Members Welcome!"
﻿﻿
﻿﻿﻿﻿
﻿﻿

Once More With Feeling! 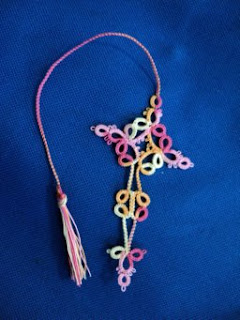 Can you stand one more picture of my many, many variations of Mark-My-Words?  Here, I've substituted lock stitch chain for the midsection of the bottom arm of the cross (2 vsp 1 [lc total 5 1st half DS alternating with 4 2nd half DS) 1 vsp 2).  This is the one I like best, and the one I'll keep tatting (for now!)

The Palmetto Tatters met 10 days ago, 5/18 - and I got to be with them!  Due to some software upgrades at work, I didn't have to work - - in fact, my boss encouraged me to go to "my event!"  I had such a wonderful time - I have really missed attending the meetings and enjoying the company of fellow tatters. 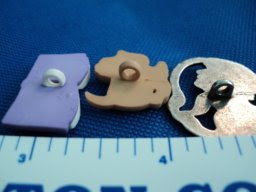 I had a question today about the brooch class I'll be teaching at Palmetto Tat Days in September - Beth asked what size button to get.  It's really the size of the shank, more than the size of the button - here are three buttons, all with the same size shank.  They all fit the tatted backing, and the shanks are the same size, so they will all go through the metal split ring that is at the center of the tatted backing.  More on the classes and prep later - we're packing up to hit the road for a day or so!
Posted by Sharren - Tatting in Greenwood, South Carolina at 9:28 AM 6 comments: 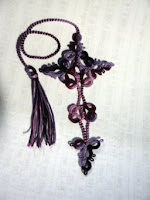 Here is Mark-My-Words in Purple Splendor - with another twist!  I've replaced the center ring of each trefoil with an SCMR and thrown a ring off in place of the third decorative picot.

I started in the same place as the previous cross; in finishing, I had two SRs to tat before tatting the chain.  Which cross do you prefer?  Or do you prefer the original?

The teacher list is up at the Palmetto Tatters website!  Yes, I am on it, and I have very distinguished company: